The Ongoing Trials of The Late Michael Jackson 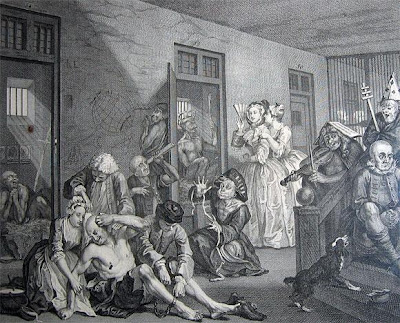 It seems that Michael Jackson is not the only member of the Jackson clan to be stony broke. The media reports the following:

Katherine Jackson, 77
She has also previously filed for bankruptcy.

Randy Jackson, 46
Does odd jobs like changing tires to support himself. He ran into serious problems with friends after he persuaded three people to take out lines of credits against their homes to help Michael pay his attorney fees.

Marlon Jackson, 51
Lives in San Diego, where he works stocking groceries at a Vons supermarket. He fell on hard times three years ago when he was forced to leave his foreclosed home and move into an Extended Stay America hotel with his wife, Carol.

Jackie Jackson, 56
The oldest son started an Internet clothing business and is trying to produce records by his sons.

Jermaine Jackson, 54
Splits time between the parents' Hayvenhurst mansion and his girlfriend's home in the San Fernando Valley. He has over $5M in federal, state and other liens against him and a 1995 bankruptcy filing, he doesn't work or have a regular income.
Posted by Ken Frost at 2:39 AM No comments:

Michael Jackson As Others Saw Him

Who Is He Really?
Background on the controversies surrounding Michael Jackson's life.
Bright Lights Film Journal: Michael & Janet Jackson
The career of the Michael and Janet.
WWWF Grudge Match: Michael Jackson vs. Prince
Commentary on a fictional fight between Jackson and Prince.
PopMatters.com: Michael Jackson
A career overview and review of "The Best of Michael Jackson".
Not so wacko Jacko
Article from the Guardian by Ros Coward.